With the new, awkwardly named Pixel Buds A-Series, Google is trying to do more than merely introduce a much cheaper set of true wireless earbuds: the company wants to get it right this time ‚Äî and get it right for under $100. Google‚Äôs second-generation Pixel Buds were certainly an improvement over the company‚Äôs original wireless earbuds; let us never forget the most overly intricate carrying case of all time. But the 2020 earbuds came with issues of their own. At the top of that list were concerns with stability. Google never managed to get the two Pixel Buds connected as reliably as many competitors, and some owners still complain of audio dropouts even after numerous firmware updates.

In several ways, Google has succeeded at its goal. The $99 Pixel Buds A-Series are more comfortable to wear over longer stretches of time than the pricier earbuds. They retain the same enjoyable sound quality, and hands-free ‚ÄúHey Google‚Äù access to Google Assistant and features like real-time language translation are still useful tricks to have at your disposal. The carrying case is just as fun to fidget with as before (though it lost wireless charging) and has the same satisfying thunk when you close it. Google promises the same five hours of continuous battery life, with a total of 24 hours when you include case recharges.

The bad news is that Google didn‚Äôt fully overcome the connectivity issues, though it made some improvement. I recently talked with Google‚Äôs Sandeep Waraich, who went over some of the changes made to the A-Series buds that were meant to enhance wireless reliability. Each earbud connects individually to the source device. Both the antenna and chipset architectures were optimized for stronger transmission power and increased range to avoid cross-body audio dropouts. There‚Äôs even an all-new chipset inside, though Google declined to tell me who manufactures it. 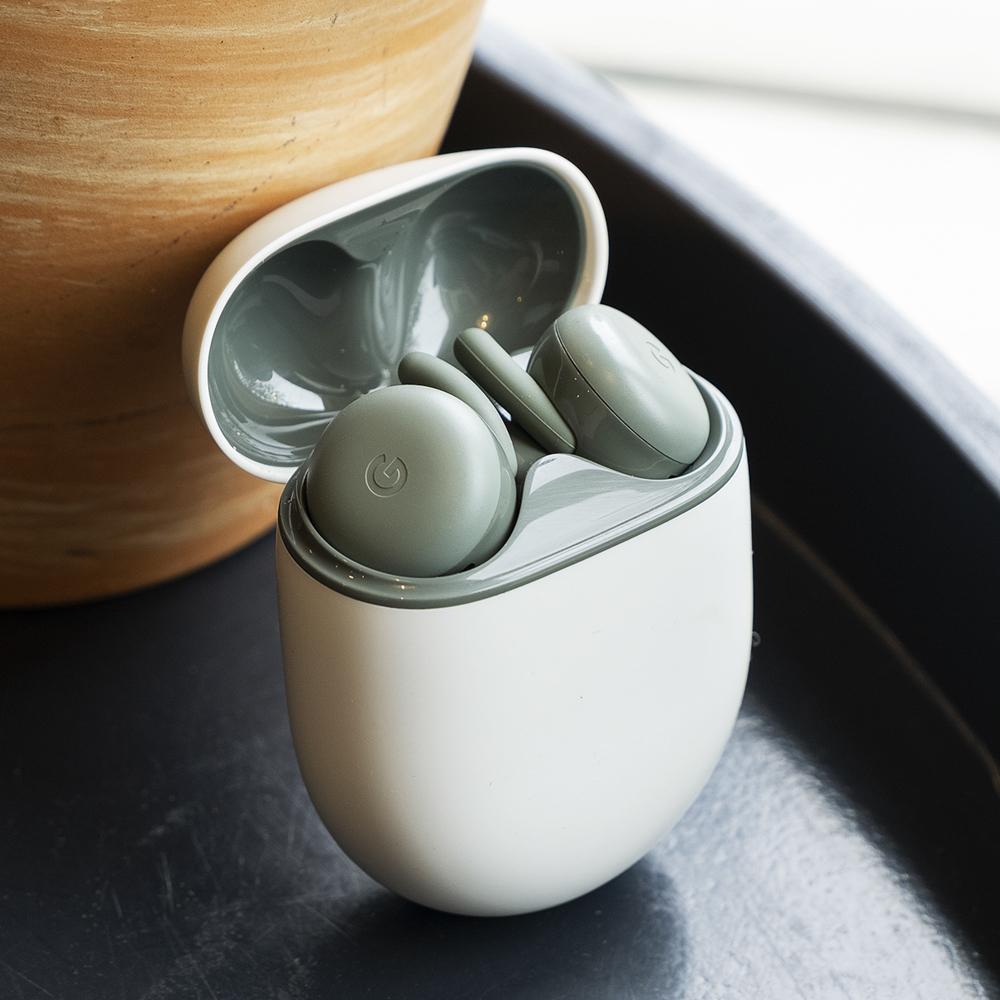 But in my experience so far, the Pixel Buds A-Series still have occasional blips and very brief audio interruptions. It‚Äôs not nearly as glaring of a problem as before, and I really only noticed it on the move (and on busy streets with plenty of wireless interference), but it‚Äôs still something you might encounter. The Bluetooth connection does seem to be stronger regardless of which pocket your phone is in. I find that it‚Äôs easier to tolerate things like this for $99 than the $179 that Google still asks for the 2020 Pixel Buds, but I wish they were gone completely. Almost, but not quite. The connection troubles were bad enough for some Pixel Buds 2 owners that they returned the earbuds; I don‚Äôt think it rises to that severity on the A-Series.

Google also told me about some subtle improvements it made to the physical design. The A-Series earbuds look nearly identical to the 2020 Pixel Buds, but according to Waraich, the nonremovable ‚Äústabilizer arc‚Äù ‚Äî a source of discomfort last time after prolonged listening ‚Äî has been made softer and smaller than before. I‚Äôve got large ears, and it seems like the hook never settles into the folds of my ear the way it‚Äôs meant to, but the Pixel Buds A-Series sit snug and stable regardless.

Google also shaved off a few milligrams of weight from each earbud. The Pixel Buds A-Series come in either white or olive green, and the inside of the carrying case is now color matched to whichever earbuds you get. In the ear, the Pixel Buds continue to have a very discreet, flush style and can be hard to spot when looking at someone head-on.

The acoustic architecture is unchanged, so the sound signature between the Pixel Buds and Pixel Buds A-Series is very consistent. That‚Äôs a good thing. Google aims for full, natural audio reproduction, and that‚Äôs what you get from these earbuds and their 12-millimeter drivers. You can still enable the ‚Äúbass boost‚Äù option in settings to give the low end some added oomph. Even with bass boost active, the Pixel Buds don‚Äôt match the boominess of something like the Jabra Elite 75ts or Sony‚Äôs WF-XB700s. Still, there‚Äôs a level of clarity that outshines many earbuds that sell at the $100 mark. Waraich told me that Google increased overall volume levels across the board after some customers found the 2020 Pixel Buds couldn‚Äôt crank as high as they‚Äôd hoped.

But although the Pixel Buds A-Series can get louder, they still have to contend with a lot of the outside world. Like the previous model, these A-Series earbuds just aren‚Äôt very good at noise isolation. While working from the outdoor seating area at my local coffee shop, I could hear an annoying level of traffic at all times. I think it partially comes down to their vented, airy design, but Google seems to struggle with this more than other companies.

Google says it actually tweaked the spatial vents to allow less outside noise in, but it‚Äôs still a noticeable downside of these earbuds. I think it‚Äôs inherently got something to do with the fit and ‚Äúgentle‚Äù in-ear seal that Google had in mind with the design. What‚Äôs become clear to me is that the next flagship Pixel Buds really need some form of active noise cancellation to counteract this. I know there are people who prefer some awareness of what‚Äôs happening around them, but you get a little too much of that with the Pixel Buds.

You can pair and listen to Google‚Äôs Pixel Buds A-Series without needing to agree to anything. However, installing the Pixel Buds app comes with a number of mandatory agreements:

Final tally: at least three mandatory agreements if you want to get the most from the Pixel Buds A-Series.

I already mentioned the loss of wireless charging, but other sacrifices that Google made to hit the $99 price aren‚Äôt as obvious. The swipe forward / back gestures that let you easily control volume on the Pixel Buds are gone; now you‚Äôre limited to just taps for track controls. The A-Series earbuds also ditch the ‚Äúexperimental‚Äù attention alerts feature that could detect specific sounds like sirens, dog barks, or a baby crying. And the LED that was on the inside of the Pixel Buds case (to indicate charge status of the buds) is also history. These omissions make sense to me, and Google has at least preserved other important vitals like IPX4 water and sweat resistance. Voice calls also remain a Pixel Buds strength on the A-Series, with dual beamforming mics that do a good job of plucking your voice out of noisy environments and maintaining clarity during phone chats or work conference calls. Voice commands to Google Assistant were also recognized loud and clear.

The ‚Äúadaptive sound‚Äù feature, which automatically adjusts volume based on your surroundings, is also carried over from the 2020 Pixel Buds. It works reasonably well and only activates when there are sustained changes in ambient noise as you move between different locations, but I‚Äôm old-school and prefer controlling volume myself rather than letting algorithms do it. The Pixel Buds A-Series still support Android‚Äôs Fast Pair feature for quick setup. On Pixel smartphones, the companion app is built in, but you can also grab it from the Play Store on other Android phones. With it, you can locate your earbuds, toggle settings like bass boost and in-ear detection (another thing Google didn‚Äôt skimp on), or check battery levels for the earbuds and case. No such app exists for iOS, however.

By holding onto a lot of what worked best on the 2020 Pixel Buds ‚Äî namely sound quality and hands-free voice controls ‚Äî and improving other parts that didn‚Äôt, Google has ended up with an appealing set of $99 earbuds. The Pixel Buds A-Series haven‚Äôt fully stamped out the biggest issue that dragged down their pricier older sibling, and the level of outside noise your tunes compete against will turn some people away. But even with some of the things Google left out, you‚Äôre getting a better overall product for less money.

Photography by Chris Welch / The Verge