Accessory brand Nacon recently put out its $50 RIG Pro Compact wired controller for the Xbox Series X / S (and Xbox One) consoles and PC, and I was immediately drawn to it. It doesnŌĆÖt try anything revolutionary, but I have a thing for controllers that drastically alter the shape of the console makerŌĆÖs reference design. In this case, NaconŌĆÖs is a tinier, shorter take on MicrosoftŌĆÖs latest controller, but the analog sticks and triggers feel just as large ŌĆö some of the buttons are actually larger. ThereŌĆÖs less distance between where your thumbs lie on the sticks and where the triggers are, which should be a boon for people with small hands or those who just want to feel like everything is easily within reach.

ItŌĆÖs a good-looking little controller. But setting the form factor to the side momentarily, one of the main features of the Rig Pro Compact is that it has a 3.5mm audio port for headphones and that it unlocks access to the Dolby Atmos app on PC and Xbox once you plug it in. With it, youŌĆÖll get DolbyŌĆÖs spatial audio advancements through wired headphones or headsets you connect to the Pro Compact. ItŌĆÖs a nice incentive if youŌĆÖre looking for a wired controller, but I donŌĆÖt consider this to be a must-have feature.

Whether you should buy the Pro Compact depends mostly on the size of your hands. As I mentioned, itŌĆÖs a shorter controller from top to bottom than MicrosoftŌĆÖs, so thereŌĆÖs less distance between the triggers and buttons. That change, while beneficial for many, has a few knock-on effects that might negatively impact your experience with it, as it did for me. 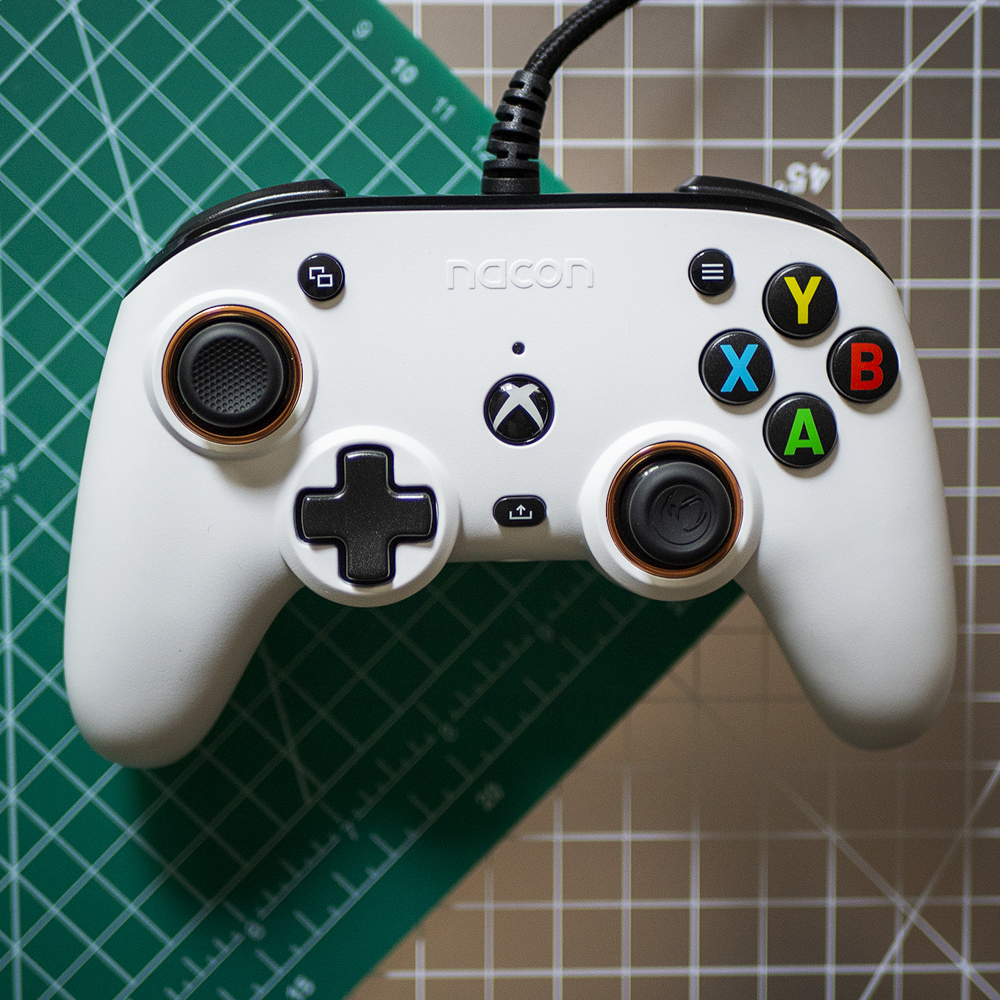 I have medium-sized hands and their small grips tuck comfortably into my palms, but the rear section of the controllerŌĆÖs housing for the triggers gets in the way of where IŌĆÖd normally rest my index finger knuckles on MicrosoftŌĆÖs controller. This likely wonŌĆÖt be problematic if youŌĆÖre someone who keeps both sets of pointer and middle fingers at the ready on shoulder buttons (though, I have yet to meet anyone who uses a controller like this).

Another change that might be an issue for more people is the relocation of the view, menu, and share buttons. TheyŌĆÖre much closer to vital controls on the Pro Compact than they are on MicrosoftŌĆÖs controller. This oneŌĆÖs more nitpicky than the last, but it leads to accidental presses during gameplay. The menu button is so close to the X, A, B, Y buttons that it looks and feels like it belongs in that cluster of inputs. On the topic of buttons, the tactility of each face button feels spot-on compared to MicrosoftŌĆÖs controller, though around the back the rear triggers feel like they have a shorter pull, which makes them less satisfying to use.

One of my favorite things about the Pro Compact is its companion app available for Xbox and PC that lets you tweak the sensitivity of both sticks (in addition to their respective dead zones). It also allows you to remap every button on the controller to your liking, change the actuation distance of the triggers, and toggle the directional pad between four-way inputs to eight-way for more control options. The vibration can be toggled on or off in the app, as well. Microsoft lets you adjust many of these settings with its own controllers, but not every third-party company goes through the effort of making their own app.

If most of the controllers on the market for Xbox or PC are too big for your hands, the Nacon Pro Compact is fairly easy to recommend giving a try at $50. ItŌĆÖs one less thing to connect wirelessly or manage battery levels for, and its 9.8-feet braided cord is lengthy and has a breakaway connector to let it safely detach if thereŌĆÖs force applied to the cable. ThatŌĆÖs all great, but if you donŌĆÖt have any issues using MicrosoftŌĆÖs own Xbox controller from an ergonomic standpoint, there isnŌĆÖt much here thatŌĆÖll make your time gaming more enjoyable. I fit into the latter group, and while I could enjoy casual gameplay with the Pro Compact, itŌĆÖs tough to turn away from the more familiar, comfortable curves of MicrosoftŌĆÖs model.

Photography by Cameron Faulkner / The Verge