All in all, Asusā Chromebook Detachable CM3 is a nice package. Itās a 10.5-inch tablet with a magnetically attached fabric cover and kickstand. Itās $389.99 as tested, which means itās priced far below all kinds of convertible Chromebooks. Iām not the first to make this comparison, but itās a slightly more expensive and slightly fancier version of the $269 Lenovo Chromebook Duet that impressed me so much last year.

I think the CM3 is a slightly worse purchase than the Duet for most people who are looking for a secondary device or a small Chromebook for a student. The CM3 does offer a few noticeable benefits over the Duet, but Iām not sure theyāre worth $100. While features like a dual-folding kickstand, a garaged stylus, and a headphone jack are nice to have, none of them are as central to a deviceās user experience as its processor. And while $269 is an acceptable price to pay for a tablet with a MediaTek chip, $389.99 is pushing it.

With all that said, I donāt have many problems with this Chromebook. Itās just in a bit of an odd spot. 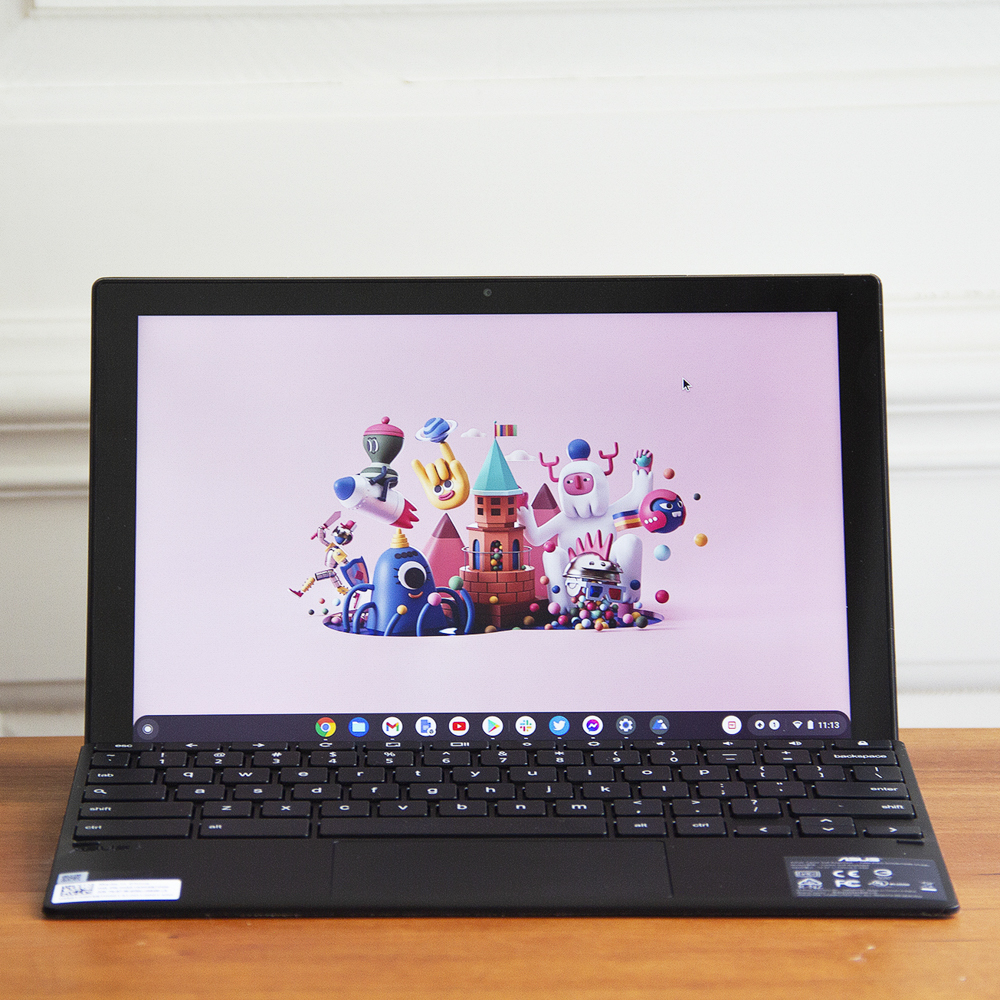 The most important thing to understand about the CM3 before you buy it is the size. Itās small, with just a 10.5-inch screen. This brings benefits and drawbacks. On the one hand, itās quite slim and portable, at just 0.31 inches thick and 1.1 pounds (2.02 pounds with the keyboard and stand attached). Itās the kind of thing I could easily carry in my purse.

On the other hand, a 10.5-inch screen is cramped for a desktop OS like Chrome OS (though it is bright enough to use outdoors, and I appreciate that it has a 16:10 aspect ratio ā 16:9 would be unbearable for me at this size). But it was too small for me to comfortably use as a work driver. I had to zoom out far to be able to see everything I needed to in my Chrome windows.

It also means thereās only so much space for the keyboard deck, which is also cramped. The touchpad, in particular, is small. The keyboard itself is roomier than the Duetās, though; it has a surprising amount of travel and a satisfying click. While the small keys are a bit of an adjustment, none are small enough as to be unusable.

Small doesnāt mean cheap, and the CM3ās build is fairly sturdy overall. The palm rests and detachable keyboard deck feel quite plasticky, but the tablet itself is aluminum (with ādiamond-cut edges,ā per Asus). The magnetic cover is made of a woven fabric and looks quite similar to the cover of the Chromebook Duet. The cover is included with the price of the CM3, which isnāt the case with some detachables (such as Microsoftās Surface Go line).

A USI stylus lives in the top-right corner of the chassis. Itās firmly in there, so youāll need a nail to tug it out. Itās small and not my favorite stylus Iāve ever used, but it is there and does work. The Duet supports USI styluses, but it doesnāt come with one, so thatās one advantage the CM3 brings.

The main way the CM3 is unique to other detachables is that its kickstand folds multiple ways. That is, you can fold it the long way when youāre using the tablet like a laptop, or you can flip the tablet vertically and fold the kickstand horizontally. This is a cool feature I havenāt seen before, and it does work. I was never worried about the CM3 falling over in either direction.

On the other hand, the only real use case I can think of for the horizontal position is video calls where you donāt need to have the keyboard attached and are okay with the camera being on the side of the screen. You can take your own view, but Iād rather use an iPad or dedicated tablet for these purposes and have the camera in the right place.

My unit did have a bit of fraying on the edges of the keyboard deck, which was disappointing to see on a brand-new device, even at this price. The kickstand cover also slipped off the tablet a few times while I was adjusting the height, which isnāt something that ever happened with the Duet.

Speaking of convertibility, the CM3 has a two-megapixel front-facing camera as well as an 8-megapixel rear-facing camera. Both cameras deliver a surprisingly reasonable picture. I wasnāt too washed-out when I did a video call outside, nor was I too grainy in dim light. That said, the dual-camera setup is another cool-sounding feature that probably isnāt the most pragmatic: the rear camera isnāt good enough for actual photography of any kind, and the best use case is probably for snapping pictures of a whiteboard in class. It also takes a few seconds for the CM3 to swap between cameras (itās not nearly as quick of a swap as it is on an iPhone, for example), so it wouldnāt have saved me a ton of time over just whipping out a phone.

The CM3ās MediaTek MTK 8183 is a hybrid chip thatās mainly used in Android tablets. (Itās a different MediaTek chip from the one that was in the Duet last year but is very similar to the one in, uh, Amazonās new Echo Show 8 smart display.) Itās far from the most powerful processor you can find in a Chromebook, but thatās by design. Battery life is going to be a higher priority for many users who are considering a device as portable as the CM3.

The battery life is, in fact, excellent. I averaged 12 hours and 49 minutes of continuous use running the CM3 through my regular workload of Chrome tabs and Android apps, including Slack, Messenger, Twitter, Gmail, Spotify, and an occasional Zoom call with the screen at medium brightness ā over an hour longer than I saw from the Duet with the same workload. This is already a heavier load than many people may want to put the CM3 through, so you may get even more time between charges. The 45W USB-C adapter juiced the CM3 up to 40 percent in an hour, making it much faster than the Duetās wimpy 10W charger.

That battery life doesnāt come free, though, and the CM3ās performance was a mixed bag. It works fine in Chrome, for example, albeit with a teensy bit of sluggishness when swapping tabs and resizing windows, as well as other Google services like Gmail, Docs, Drive, Calendar, and Meet (and it comes with a free 12-month 100GB membership to Google One for the rest of this year). Gaming is also fine. Flipping Legends and Monsters were both smooth and stutter-free, regardless of whether the CM3 was plugged in or running on battery.

Every smart device now requires you to agree to a series of terms and conditions before you can use it ā contracts that no one actually reads. Itās impossible for us to read and analyze every single one of these agreements. But we started counting exactly how many times you have to hit āagreeā to use devices when we review them since these are agreements most people donāt read and definitely canāt negotiate.

To use the Asus Chromebook Detachable CM3, you have to agree to:

Thatās three mandatory agreements and six optional ones to use the Asus Chromebook Detachable CM3.

I also think Chrome OSās tablet mode, which the CM3 supports, has gotten pretty good. It uses Android-esque gesture controls that can help flatten the learning curve for new Chromebook users. Swiping up brings you to the home screen, for example, and swiping right swaps between webpages. You can access a version of Chrome specifically for tablets, which allows you to easily open, close, and reorder tabs with drags, swipes, and large buttons. Itās not quite like using an iPad, but I do think itās a smoother experience than Windowsā tablet mode (especially in Chrome).

All you have to do to switch in and out of tablet mode is snap the keyboard on and off. It takes a second, and my windows didnāt always quite go back to the way Iād arranged them when I put the keyboard back on, but itās a reasonably smooth affair overall.

But the CM3 didnāt perform well on every task I needed. Sometimes when I was trying to use Slack or Messenger over a pile of Chrome tabs, something would freeze. Zoom calls were possible ā which is more than can be said for some budget Chromebooks ā but I did run into lag between audio and video inputs. Slack froze and crashed quite often, and Spotify crashed a few times as well.

Photo editing was where I really ran into trouble. Lightroom was basically unusable on the CM3 with just a few things running in the background. I tried to edit a batch of around 100 photos and could consistently only get through a few before the program crashed. I tried to move over to Google Photos, which also eventually crashed and ended up having to do everything in Gallery. Of course, not everyone will be editing photos on their Chromebook or pushing it as hard as I was pushing this one, so itās a matter of knowing your own needs.

Speaking of Zoom meetings, the dual speakers are okay for Zoom calls but not too much more. The songs I played had stronger percussion than I sometimes hear from laptop speakers, but it was thin and tinny overall. The microphone did seem to work well and didnāt have trouble picking up my voice on calls.

This was a difficult product to score. I do think the CM3 is a great device. And it does offer a few benefits over the Chromebook Duet that justify it costing a bit more. Iād probably purchase it over the Duet myself for the keyboard alone if I were looking for this type of device. The versatile kickstand, built-in stylus, and decent build quality are nice perks as well.

The CM3 is a great device

But āif I were looking for this type of deviceā is doing some heavy lifting in that sentence. Iām not looking for a MediaTek device, and thereās a reason Iām not. The battery life is impressive, sure, but itās just not enough horsepower for the workload I need. And if you are someone whose needs are suited to this low-powered processor (and there are plenty of these people in the world), I really think $389 is at the very high end of what you should be spending.

Sure, the CM3 has a (just okay) stylus, a kickstand with a funky fold, slightly better battery life, and one extra port. But itās also on par with or slower than the Duet in most tasks I tried, the audio is worse, and itās thicker and heavier. Given all that, Iām not convinced the CM3ās advantages are worth $100 to most people who are shopping in this category.

Google is introducing a new feature to Google Photos that lets you hide specific pictures so they wonāt show up in your…
By ronpsNovember 13, 2022