Yep, this is a Swift. It has all the features that characterize Acer‚Äôs Swift line: a thin body, a lustrous Acer logo, a chassis so light it‚Äôs hard to believe you‚Äôre holding a laptop and not an empty shell. But the 3X is targeting a slightly different market from the Swift 3 and Swift 5 for one reason alone: it has a discrete GPU.

Intel‚Äôs new Iris Xe Max, the company‚Äôs new discrete graphics card, is making its first appearance in an Acer laptop. With a starting price of $899.99, the Swift 3X is both one of the lightest and one of the most affordable systems you can buy with discrete graphics. It‚Äôs not a system meant for intense gaming, though ‚Äî the target audience is closer to amateur creators and students who work with photo and video for class. For this specific demographic, the Swift 3X makes sense. For anyone else, the 3X is a bit below its price point in enough other areas that there are likely better options.

Our review of
Acer Swift 3X 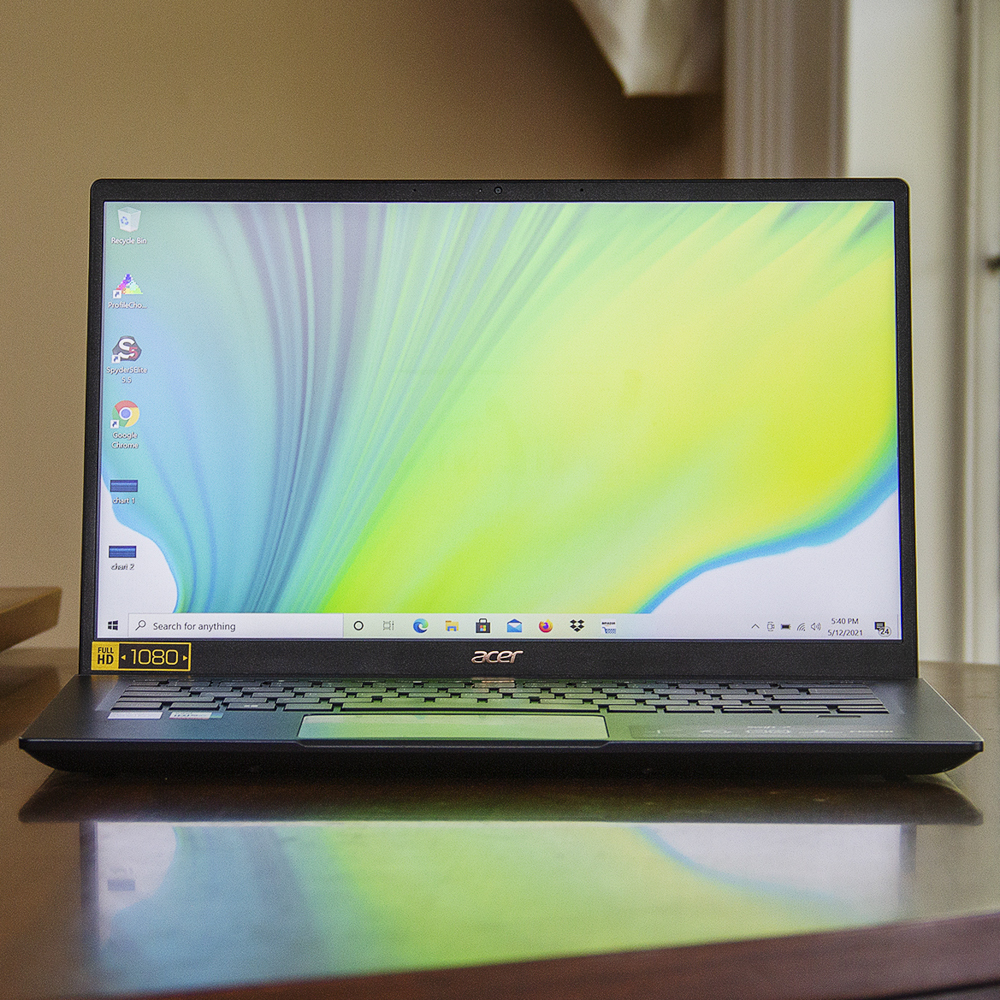 The first thing you might notice about the Swift 3X is its interesting color scheme. The model I tested comes in a new ‚Äústeam blue‚Äù color, which is a nice change from the sea of black and gray laptops that you‚Äôll see in any public setting. There‚Äôs a bright blue hinge on the back with ‚ÄúSwift‚Äù printed across it as well, which will certainly make the device stand out.

Weight, though, is the standout feature. The 3X weighs just 3.02 pounds and is 0.71 inches thick. As devices with discrete GPUs go, it‚Äôs an unusually portable machine. I brought the 3X on a weekend trip and could slip it into a packed backpack with no problem. It didn‚Äôt weigh me down at all. In terms of ports, you get a USB 3.2 Type-C Gen 2 with Thunderbolt 4 and DisplayPort, two USB 3.2 Gen 1, and an HDMI 2.0, as well as a combination audio jack. There‚Äôs a fingerprint reader below the arrow keys on the chassis, which worked well.

The display is another standout feature. It looks great, with excellent colors and sharp details. What‚Äôs nice is that its matte finish, combined with Acer‚Äôs ComfyView technology, does a really excellent job of eliminating glare. Using the 3X outdoors was a mixed bag, though ‚Äî I didn‚Äôt see my reflection, but the screen still wasn‚Äôt quite bright enough to comfortably use. (It maxed out at 274 nits in our testing ‚Äî you want at least 300 nits to use a device in very bright settings.)

That said, build quality is one area where the Swift 3X doesn‚Äôt quite measure up to competitors. Most of the chassis is aluminum, but it has a bit of a flimsy and plasticky feel. There‚Äôs noticeable flex in the keyboard and screen, which I don‚Äôt love to see in laptops over $1,000. And it‚Äôll look like a bit of a clunker next to more expensive fare like Acer‚Äôs own Swift 5 ‚Äî a big reason is that the bezels aren‚Äôt tiny (Acer claims an 84 percent screen-to-body ratio) and are visibly plastic. It also feels like a step down from some similarly priced devices like the Asus Zenbook 14.

The keyboard and touchpad are functional but not my favorites. They‚Äôre a bit shallower and stiffer, respectively, than the best input devices you can find at this price. The touchpad is spacious enough but had significant trouble with palm rejection ‚Äî my cursor bounced all over the place often while my palm was on the pad, and it sometimes interfered with my typing.

Finally, this isn‚Äôt a machine I‚Äôd recommend for peripheral-free videoconferencing. While the microphones didn‚Äôt have any trouble picking my voice up, the webcam and speakers leave a lot to be desired. The 720p webcam is grainy and didn‚Äôt do well in low-light settings. (It doesn‚Äôt support Windows Hello facial login, either, though that‚Äôs not a crime at this price.) The audio is adequate for Zoom meetings, but I heard some distortion at maximum volume and had to turn the thing down. And I‚Äôd recommend an external speaker for anything more. When a friend and I tried to watch a YouTube video on the device, we had to lean in to hear the words clearly. Music has clear vocals, but bass is weak.

The Swift comes loaded with DTS Audio Processing, which allows you to swap between presets for music, movies, and games, but there‚Äôs no preset for videoconferencing. I actually preferred listening to music on the movie preset, which seemed to have the best balance overall.

These are all compromises you‚Äôre making for the Swift 3X‚Äôs main attraction, which is its performance. In addition to the Intel graphics, my review unit is powered by Intel‚Äôs Core i7-1165G7. This quad-core chip powers many of the best ultraportable laptops on the market and should be capable of doing whatever general office tasks you need to do. It also enables a number of modern amenities, including support for dual-band Wi-Fi 6, Bluetooth 5.1, and Thunderbolt 4.

My test configuration, which also includes 16GB of RAM and 1TB of storage, costs $1,199.99. The $899.99 base model has a Core i5-1135G7, 8GB of RAM, and 512GB of storage. I imagine that most people in the Swift 3X‚Äôs target audience will want the more expensive model (for the extra storage if nothing else) unless they‚Äôre on quite a tight budget. But note here that you‚Äôre paying a premium for the GPU ‚Äî an Acer Swift 3 with identical specs to my test model (which is basically this machine without the GPU) costs $999.99, while an Acer Swift 5 (with no GPU, but a step up in build quality and a chassis that‚Äôs over half a pound lighter) is just $100 more at $1,299.

The system does deliver, though. I used the Swift 3X to edit a number of photos with multiple other apps and tasks running in the background, and the device breezed through it without any slowdown or lag.

I never felt much heat, even when I was bouncing between over two dozen Chrome tabs ‚Äî the bottom of the chassis got slightly warm, but that was the extent of it. I only occasionally heard the fans spin up during my daily work. The fold-under hinge creates some extra ventilation space, as do the dual copper heat pipes. You can swap to Performance and Silent fan profiles as well, though I didn‚Äôt find the Silent profile necessary given how quiet the Swift was on default settings. I did hear some annoying coil whine on Silent once or twice.

The Iris Xe Max GPU delivers entry-level graphic performance. The Swift 3X scored a 313 on PugetBench for Premiere Pro, which measures a device‚Äôs performance on a number of Premiere Pro tasks. That means it‚Äôs a step above integrated graphics ‚Äî it beats the LG Gram 17 and the XPS 13, with the same RAM and processor, and it trounces both the AMD-powered and Intel-powered Surface Laptop 4. But it doesn‚Äôt beat the M1 integrated graphics in Apple‚Äôs MacBook Air, and it‚Äôs still a step down from midrange Nvidia graphics cards: the Dell XPS 15 with a GTX 1650 Ti scored well above a 400.

To get an idea of how these numbers translate to real-world tasks, we ran a five-minute, 33-second 4K video export. When comparing this machine to good ultraportables with Intel integrated graphics, you‚Äôre looking at a two- to three-minute improvement in export time with the Xe Max. The Swift 3X completed the task in eight minutes flat; the Gram 17 and the XPS 13 both took over 10 and a half minutes, while the AMD Surface Laptop 4 took 16:33. The Swift 3X was even 15 seconds faster than the MacBook Air, though the MacBook Pro finished the task in 7:39. Again, though, the Swift 3X is closer in performance to all of the Intel machines than to anything with a decent GPU ‚Äî the XPS 15 took just 4:23.

Battery life was also a pleasant surprise, given the discrete GPU. I averaged seven hours and 51 minutes of continuous multitasking at around 200 nits of brightness. That‚Äôs comparable to the life span I got from the Swift with the same workload and better than what I got from the cheaper Swift 3. An unfortunately large amount of bloatware also comes preloaded onto this device (ExpressVPN, Norton Security Ultra, other various promotional stuff) so you may see better battery life if you take a few minutes to clean all that out.

The Acer Swift 3X offers more powerful specs than most laptops you‚Äôll be able to find at its price point, with a standout display and battery life, and it manages to do so while being quite light and portable. It‚Äôs a step above machines with Intel‚Äôs integrated graphics, and a step below anything with a half-decent Nvidia GPU. That‚Äôs the clearest case in its favor ‚Äî and if that sort of laptop is what you‚Äôre looking for, you may be uniquely suited to the 3X. The major competitor at this weight and price point I can think of is the Asus ZenBook 14, which can come with an entry-level Nvidia GPU, but the chips in it are a generation old now, so we wouldn‚Äôt expect the same performance.

With that said, most other aspects of the chassis (the touchpad, the keyboard, the webcam, the speakers, the general build) aren‚Äôt quite up to par with other devices you can find at the $1,199 price point. I think you have to really want the GPU. If you don‚Äôt, but you‚Äôre shopping at this price point and are a fan of the Swift line, the Swift 5 offers better build quality, a thinner and lighter chassis, and a better keyboard and touchpad for just $100 more, with integrated graphics that are still pretty dang good.

The Acer Swift 3X presents you with multiple things to agree to or decline upon setup.

The mandatory policies, for which an agreement is required, are:

In addition, there is a slew of optional things to agree to:

In total, that‚Äôs six mandatory agreements and 17 optional ones.

Dolby Vision gaming is arriving on the Xbox Series X and S for testers who are a part of the Xbox Insider‚Äôs…
By ronpsJuly 16, 2022

A set of Microsoft assistance web pages have actually stood for the unannounced Surface area Laptop computer 4, recommending a launch might…
By ronpsJuly 15, 2022

Microsoft is reportedly working on a big overhaul to its app store for Windows. Windows Central reports that the software maker plans…
By ronpsJuly 14, 2022