The new Studio Buds are BeatsŌĆÖ second pair of true wireless earbuds and follow the Powerbeats Pro, which remain my pick for the best all-around earbuds for fitness purposes like running or hitting the gym. With its latest pair, Beats is hoping to attract a much wider audience. That starts with the price, which is $149.99 ŌĆö a full $100 less than the AirPods Pro. For the first time in Beats earbuds, they include active noise cancellation. And with other new features, Beats is extending an olive branch to Android users, which might come as a surprise for a brand thatŌĆÖs owned by Apple.

Beats says it has put an incredible amount of work into how the Studio Buds sound. ThatŌĆÖs where theyŌĆÖre supposed to exceed expectations for the price. But you donŌĆÖt get everything under the sun for $150; the most obvious missing piece is wireless charging. And their noise cancellation and transparency modes donŌĆÖt keep pace with some pricier earbuds, including the AirPods Pro.

Our review of
Beats Studio Buds 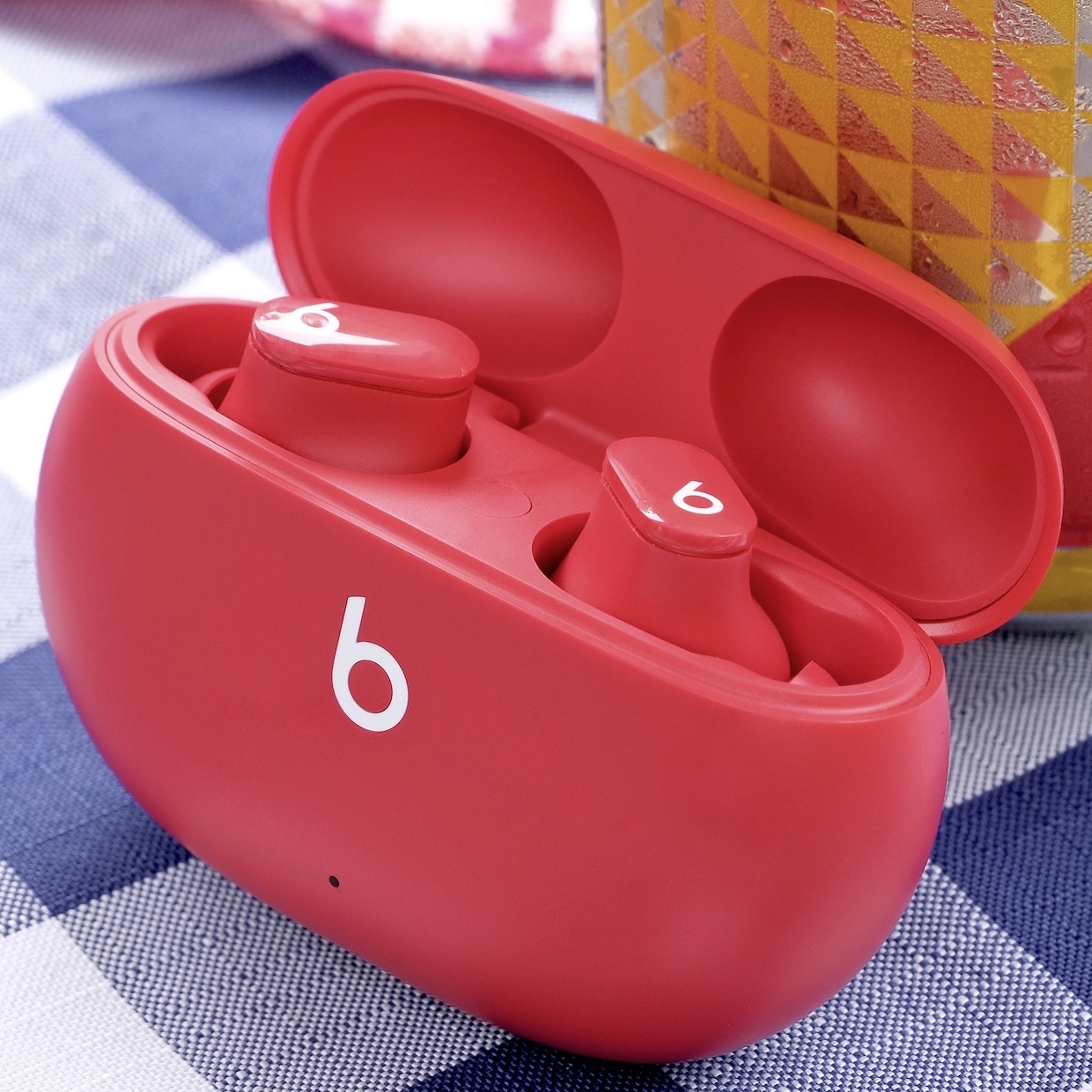 The Studio Buds have a small, light stem-less design that loses the ear hooks of the Powerbeats Pro. They look downright miniature in comparison. And the weight difference is also substantial: each of the Studio Buds is 5.1 grams, which is far more comfortable on your ears than the 20-gram Powerbeats Pro. TheyŌĆÖre also slightly lighter than the AirPods Pro, SamsungŌĆÖs Galaxy Buds Pro, AnkerŌĆÖs Soundcore Liberty Air 2 Pro, JabraŌĆÖs Elite 85t/75t, and many others on the market. ThereŌĆÖs a tiny micro-venting hole meant to reduce that clogged-up pressure feeling in your ear, and Beats includes the standard three sizes of silicone ear tips. Fit is a big plus; the Studio Buds feel extremely comfortable and never fatigued my ears at any point.

Beats leaned on learnings from its prior earbuds (and those from Apple) as it worked on this design; it also went through some prototyping with consumers to land on the final form factor. The outward-facing side is contoured around a diagonal pill-shaped ŌĆ£bŌĆØ button. ItŌĆÖs tactile and actually presses in instead of relying on capacitive touch sensors. I greatly prefer this approach since you wonŌĆÖt have to deal with accidental presses as often when adjusting the earbuds. The button only requires a light press, so youŌĆÖre not constantly jamming the buds deeper into your ears. Controls work identically on both sides: press once to play / pause, twice to skip tracks, three to go back, and long-press to toggle between ANC on / transparency / off. You can customize the long-press to activate a voice assistant instead, but thatŌĆÖs as far as Beats lets you switch things up.

The oval charging case is mercifully way smaller than the giant one that holds the Powerbeats Pro, and the red color of my review unit is quite eye-catching. ThereŌĆÖs also something reassuring about how strongly the Studio Buds are magnetically pulled into their slots. IŌĆÖm hopeful these will avoid the occasional only-one-earbud-actually-charged failures of the Powerbeats Pro.

IŌĆÖd say the most curious thing about the Studio Buds hardware is whatŌĆÖs been left out: thereŌĆÖs no Apple-made chip inside these. The Powerbeats Pro, Powerbeats, and even the $50 Beats Flex neckband earbuds all have one of AppleŌĆÖs branded chips inside ŌĆö either the H1 or W1 ŌĆö for features like instant setup, automatic pairing across all Apple devices that are signed in to your iCloud account, and audio sharing.

Despite the lack of Apple silicon, Beats has managed to replicate some of those conveniences through software. The Studio Buds support hands-free ŌĆ£Hey SiriŌĆØ voice commands. When you pop open the case near an iPhone for the first time, youŌĆÖll see the familiar setup screen (or at least something close) slide up from the bottom, just like with AirPods or other Beats products. The Studio Buds even have special integration in Control Center: you can switch between noise-canceling and transparency modes from here just as you can with the AirPods Pro. TheyŌĆÖll also automatically play Apple MusicŌĆÖs new Dolby Atmos spatial audio tracks.

But the illusion only stretches so far. If you go looking for them, youŌĆÖll notice MIA features that wouldŌĆÖve been present if the Studio Buds contained a proper Apple chip. Pairing them with your iPhone does not sync them across your other iCloud devices. Audio sharing is nowhere to be found. And the Studio Buds lack the ability to automatically hop between an iPhone, iPad, and Mac based on whichever one youŌĆÖre actively using. (They donŌĆÖt have multipoint either, so losing those seamless handoffs is all the more apparent.) These are minor sacrifices, but they do put the Studio Buds behind AppleŌĆÖs headphones or even other Beats models in terms of supporting AppleŌĆÖs ecosystem.

My hunch is that Beats likely had to leave out Apple silicon in order to include Android-specific features. The Studio Buds go farther than any of the companyŌĆÖs recent products in accommodating Android listeners. First of all, they charge via USB-C. They also support Fast Pair, so theyŌĆÖll automatically be linked to your Google account after initial setup. Both the earbuds and case now natively appear in AndroidŌĆÖs Bluetooth settings, where you can see their battery status or see the location where they were last paired to your phone. (This means the earbuds support both AppleŌĆÖs Find My network and GoogleŌĆÖs equivalent.) But you donŌĆÖt get hands-free Google Assistant, which was probably a bridge too far for an Apple-owned company to make happen.

Now onto the sound. The Beats Studio Buds feature a new driver architecture, so while the company aimed for its signature ŌĆ£powerfulŌĆØ sound, thereŌĆÖs a noticeable difference when you compare these to the Powerbeats Pro. Each has its own strengths. If you care most about driving bass to keep you motivated during exercise, the older earbuds still edge these out. The Powerbeats Pro sound still comes through as punchier to me. But the Studio Buds are better balanced with increased clarity and separation across the frequency range. Whereas the Powerbeats Pro tend to deemphasize the mids, theyŌĆÖre not as lost in the shuffle here. The EQ has improved refinement, though itŌĆÖs still the usual curve that lifts the bass and treble, and highs can sometimes give off more sibilance than IŌĆÖd prefer. Overall, the Studio Buds sound plenty good, but for all of the talk about proprietary acoustic diaphragms and custom-built drivers, Beats isnŌĆÖt flipping the script on what to expect for this amount of money.

And it needs to do better elsewhere. Passive noise isolation on the Studio Buds still leaves something to be desired. Even with a good seal, youŌĆÖre not going to feel especially blocked off from the outside world. And unfortunately, BeatsŌĆÖ noise cancellation system is one of the weaker showings youŌĆÖll find in this price range. Beats says it dynamically adapts the strength of noise cancellation based on ambient noise, but I was underwhelmed in most scenarios where I tested it. The Studio Buds do a poor job at eliminating basic traffic street noise, which makes me wary of how theyŌĆÖd manage on a plane. The transparency mode also lacks the natural feeling of the AirPods Pro and other premium buds like the Bose QuietComfort Earbuds. You donŌĆÖt have to spend a hundred dollars more to get better results: to my ears, AmazonŌĆÖs second-generation Echo Buds surpass the Studio Buds in both noise cancellation and transparency mode for less money than the Beats.

You can use the Beats Studio Buds out of the box without agreeing to anything by pairing them over Bluetooth as usual. However, using the Siri assistant on the iPhone or iPad means youŌĆÖre subject to┬ĀAppleŌĆÖs privacy policy.

Additionally, if you install the companyŌĆÖs Android app, youŌĆÖre asked if you want to automatically send analytics data to Apple. ŌĆ£Apple collects information about your Beats app and Beats product, such as the software versions, device rename occurrences, and device update success and fail rates, in order to improve the product.ŌĆØ Apple says none of this data allows the company to personally identify you. Firmware can also be updated┬Āvia BeatsŌĆÖ desktop app.

The Beats app also requests background location permission so it can ŌĆ£connect to your Beats instantly, check battery status on the fly, and access deeper functionality.ŌĆØ

Final tally: no mandatory agreements, but there are one or more optional ones.

Battery life is rated at around five hours with noise cancellation active or eight without, and the case can provide two additional top-offs. The Studio Buds are rated IPX4 for water and sweat resistance, making them workout-ready and splash-proof. And you can use either earbud independently if you want to keep one of your ears free. Voice call performance was pretty rough outdoors in busy environments, and callers found it difficult to make out my voice from the background noise. Things improved some indoors, but mic performance is another area where the Studio Buds lag competitors and their compact design might be working against them. Another annoyance is that these buds donŌĆÖt have any kind of sensors to detect when theyŌĆÖve been removed from your ears, so music wonŌĆÖt pause automatically.

There are aspects of the Beats Studio Buds that I really like. TheyŌĆÖre remarkably comfortable and have simple, easy controls. ItŌĆÖs good that the company is shifting to a more even-handed strategy that appeals to both iPhone and Android users. And the sound is enjoyable and detailed, if not earth-shattering for $150. But they settle for mediocre active noise cancellation, lack wireless charging, and come with an incomplete grab bag of Apple ecosystem bells and whistles. It feels like Beats tried to do a little too much all at once.

If you already have the Powerbeats Pro and are happy with them, thereŌĆÖs not much about the Studio Buds that warrants an upgrade. Like a lot of rivals battling it out at this price, theyŌĆÖre perfectly adequate, but they lack any one must-have standout thing. Considering the cultural clout that the Beats brand still possesses, that still might be enough for them to be a hit.

Photography by Chris Welch / The Verge

Vergecast: This week in operating systems

Every Friday, The Verge publishes our flagship podcast, The Vergecast, where co-hosts Nilay Patel and Dieter Bohn discuss the week in tech…
By ronpsNovember 19, 2022

iOS 14 basics: how to quit an app on your iPhone

Even iOS apps occasionally misbehave ŌĆö they can crash, or freeze, or otherwise stop working. If youŌĆÖre new to iOS, or just…
By ronpsNovember 17, 2022